Before I proceed, I apologize because I didn't take any photos while I was doing all this, so it will be mostly text. Also it might not be too useful since the most critical part I bought at a local store that closed down this March.

This LED configuration provides a good deal of frontal lighting which prevents the odd effect that completely top-down lights have. However, since it isn't provided by a perfectly frontal light but by side strips angled inwards, a blind spot is left towards the front middle. You can clearly see it with Strength and Yuuna, although it actually isn't THAT bad (the camera is compensating for the over-illuminated figures at the sides and my body is blocking part of the ceiling light).
Regardless, it's a pretty simple and discrete installation that even a novice like me could come up with, but some basic middle school level knowledge of electricity and soldering is necessary.
It the blind spot is a deal-breaker for you, you might be better off looking for or figuring out a different method.

First of all, this is what I needed to buy:
1.Aluminum throughs/profiles for LEDs with a light difussing cover. 18mm wide and 7mm thick (8mm after putting on the difussor). This was the hardest part to find since the space availiable is so limited. Also, it just so happens to be the right size that, when pointed diagonally inwards, is held in place by the vertical shafts, glass wall and glass shelves so no additional supports are strictly needed; now the light spread being optimal instead of them being parallel to the walls or door. Bought 2 x 2m profiles, 7€ each.
2.A 5m LED strip from Amazon ( www.amazon.es/g... at the time of writing, their only cold light option is 10m). I also needed a power adapted and a light attenuating dial (or however it's called) and fortunately this kit included both! 15€
3.Electric cable. Just needed to connect the three segments I'm going to make, so about 20cm are more than enough. 0€ since I had some lying around at home.
4.Power plugs to connect the segments. I could have connected the segments with a single piece of cable, but in case I need to make any changes or replacements this allows me to do it easilly without cutting any extra cable or needing to dismantle the whole setup. 2€ each pair, a bit expensive but I wanted to be done already.

5.A hacksaw, soldering iron, double sided tape and electrical tape. There are better/more appropriate tools than the hacksaw and the tape, but these were what I already had at home.

Proccess:
1.Measured the interior height of the Detolf and cut the profiles to be about 8mm shorter than that (so the cables can pass easily). Also cut off an extra centimetre from the difussor of one of them because the power supply's cable is much thicker and I needed to pass it at ground level. From the leftovers, I also cut a 35cm segment that would serve as the top light, having it is easier and cleaner than not.
2.Cut three pieces of the LED strip trying to match the length of each aluminum segment. Rounded down, since they can only be cut at designated points.
3.Soldered a piece of electric cable to each end of each segment (except the one that already had the power supply cable and the bottom end of the end segment). After soldering, I wrapped the soldering points with electrical tape (thermal shrink wrap would be better).
4.Then attached a plug to each cable, being careful that the + and the - of each segment line up correctly with the other segments. I actually got one wrong so I had to unscrew and reattach it. Marking the aluminum profiles, cables and plugs is a good idea to get it right.
5.Since this strip wass a bit too small to be held in place on its own, I used the adhesive it comes with to stick it to the aluminum profile, trying to keep it as centered as possible.
6.Took off the detolf every figure and every shelf.
7.Slid the longer segments between the horizontal shelf supports and the glass walls, careful not to hit anything outside the detolf, specially ceiling lamps; then I slid them towards the front until they hit the frontal vertical shafts. I placed the power supply end on the lower right side since that's where I could better hide it afterwards. It might be necessary to readjust the door's alignment so there's enough of a gap for the power cable to pass through.

8.Stuck the short segment to the ceiling parallel to the door using double sided tape. Careful to place it the right way so the + and - poles of the strip line up with the other segments correctly. Also careful that it doesn't get in the way of the door or any dust-proofing that you might want to place in the future.
9.Connected all the plugs (including the wall plug) to check that everything works.
10.Placed back the glass shelves, sliding them towards the back until they hit the vertical shafts there.
11.This is the trickiest part. Held each long profile with both halds and twisted them inwards. They easily snapped in place, getting held by the detolf's structure like this

And that's what I did. I could have got rid of the blind spot by placing additional lights on each shelf, but the necessary wiring would far exceed my skills, tools, budget and patience.
Take into account that I'm a novice at this, my only other "electrical" projects were replacing Game Boy cartridge batteries (that's what I bought the soldering iron for, 15€ for the tool and 4€ for the wire) and clumsily installing a wall plug at my grandparents' back in the Game Cube era. Someone with more knowledge and experience would be able to make a way more elegant and complete version of this.
1,135 hits • 6 favoritos • 5 comentários

WhoBeDaPlaya
Interesting idea, will look into possibly incorporating it into my next Detolf cluster
As far as top-mounted lighting, angling the LED strips 45º instead of straight down / sideways seems to help a lot : 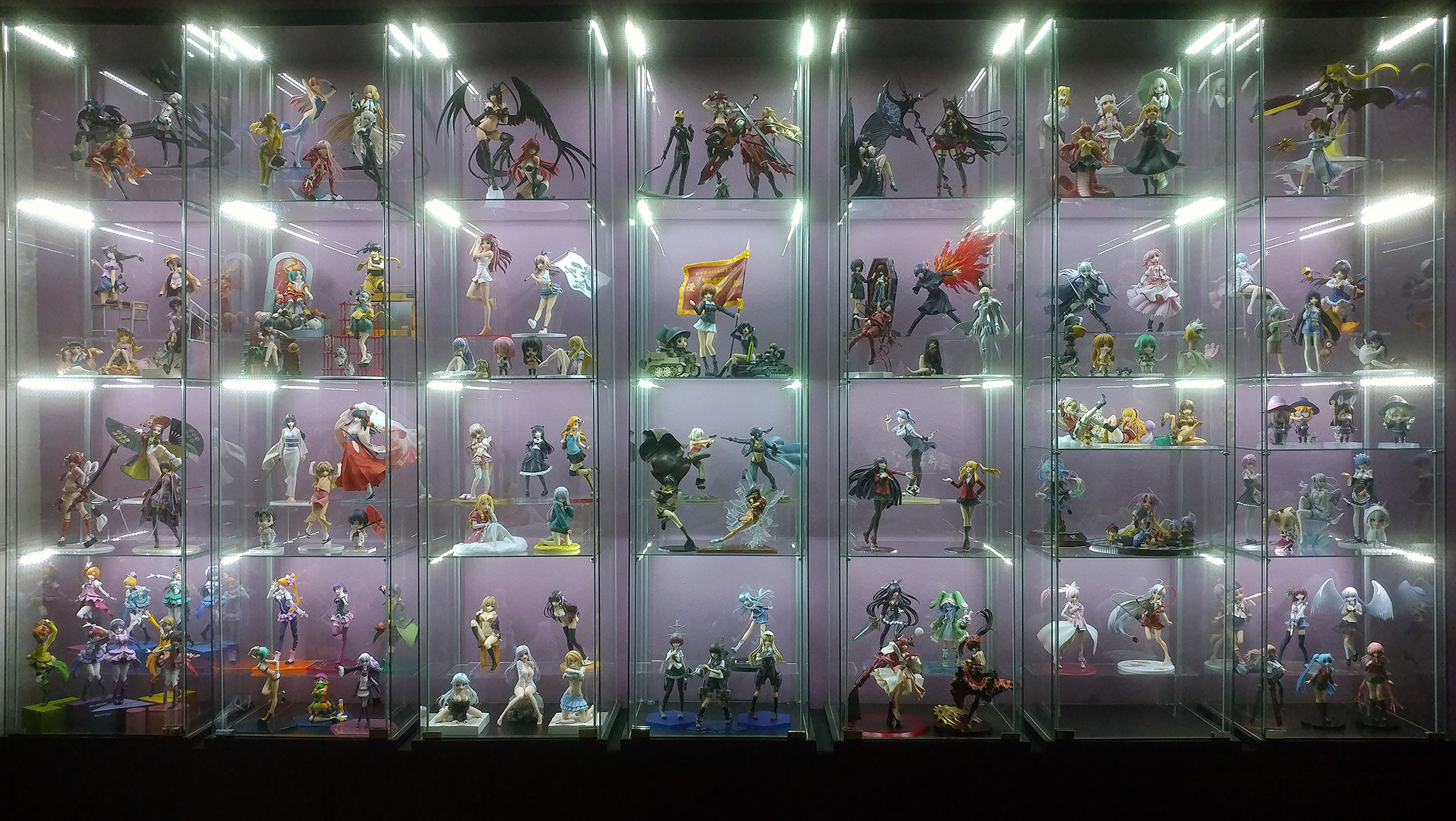 LittlePisces
To join in the image linking discussion, I like to use Cubeupload for linking pictures on here. Probably the only con is they don't accept larger files. Other than that, I didn't have any other issues and I still use that site ever since I've joined MFC.
4 meses atrás

PanchitoMatte Emilia-tan Maji Tenshi!
Deses • 4 meses atrás • #77695788So that's what it was. I tried to embed the images many times and failed so eventually I gave up and linked to the page instead, thinking it was MFC that didn't allow external embedding.
Isn't this usage like half of the point of imgur (formerly the whole point)? It even provides premade code for boards, forums, blogs, etc...
To be frank, I don't know all the details. I just know that Imgur doesn't want their service to be treated as a hosting site (they probably consider it more of a social medium). It has nothing to do with MFC's management at all. Imgur must have noticed all of the traffic routing to our site and realized we were breaching their TOS, so they blocked our domain permanently.
4 meses atrás

Deses
PanchitoMatte • 4 meses atrás • #77695303Csn you please use an image hosting site other than Imgur? They blocked MFC because how you're using them is against their TOS. I would recommend ImgBB.
So that's what it was. I tried to embed the images many times and failed so eventually I gave up and linked to the page instead, thinking it was MFC that didn't allow external embedding.
Isn't this usage like half of the point of imgur (formerly the whole point)? It even provides premade code for boards, forums, blogs, etc...
4 meses atrás⊛

PanchitoMatte Emilia-tan Maji Tenshi!
Csn you please use an image hosting site other than Imgur? They blocked MFC because how you're using them is against their TOS. I would recommend ImgBB.
4 meses atrás⊛