Like many of you, I love collecting figures and ever since I started 3 or 4 years ago, my collection has been growing greatly. :D Even though I do have some space issues here and there, my display cases have always offered enough room for all of my figures. It was only like some weeks ago that I saw myself confronted with a real problem. A problem which I did not see coming ever. I ordered some Nendoroids lately in order to make myself a custom Shiro Nendoroid and yeah, while I was at it .. I also ordered 2 Nendoroids which I always wanted to have coz they were so goddamn cute! :3 These Nendoroids are Menma and Melissa. Now while my boyfriend hates them with a passion, I absolutely adore them. However, they did not fit anywhere into my collection. I collect mostly scaled figures you see, and they just felt out of place. So I couldn't put them in the display cases. I would have left them at my desk but again .. my desk is in our bedroom and my bf was kinda reluctant to wake up every morning looking at these two cuties. ^^'' So there was really only way to solve this problem, ne? So the next day was a very special day. It was ....

So here they are, Menma and Melissa, watching me while I try to get some work done. Which is not that easy with these guys looking all cute and arrgg~~ XD But yeah. :D I feel that it's great having them around. Whenever someone gives me a hard time or I get the feeling that I finally need to get that battle axe and use it ... I look at them and everything is ok. :D Oh and our cleaning lady loves them! :3

So, does anyone else have figures at work? Which figures did you take with you and how do your collegues react?
8,559 hits • 0 favorito • 41 comentários

sankari
At my former job I had my saint seiya gold saints mug for drinking coffee ;)

aznsaiyan1029
i work in a hospital environment, so I never have this thought in my mind, but it may change after i read this.
7 anos atrás

They definitely cheer me up, and well, sort of yes, they do help, I need to pay my figure bills so gotta work if I want more of bright cuties :D

TrashCat • 7 anos atrás • #1567758Haha that's great! ^^ They really try to motivate you, right? Same here ... Melissa always gets angry when I secretely open the Mandarake site ... XD I need to check from time to time, you know?!

Thanks :) This rainbow-colored flock is inspiring, both for work and for figure shopping :D
7 anos atrás

TrashCat
mikki-malu • 7 anos atrás • #1567309I work at home so I can put on my desk anything I like as long as it leaves me some working space :) So my figures took half a table. Can't complain though, they're very helpful :)))) 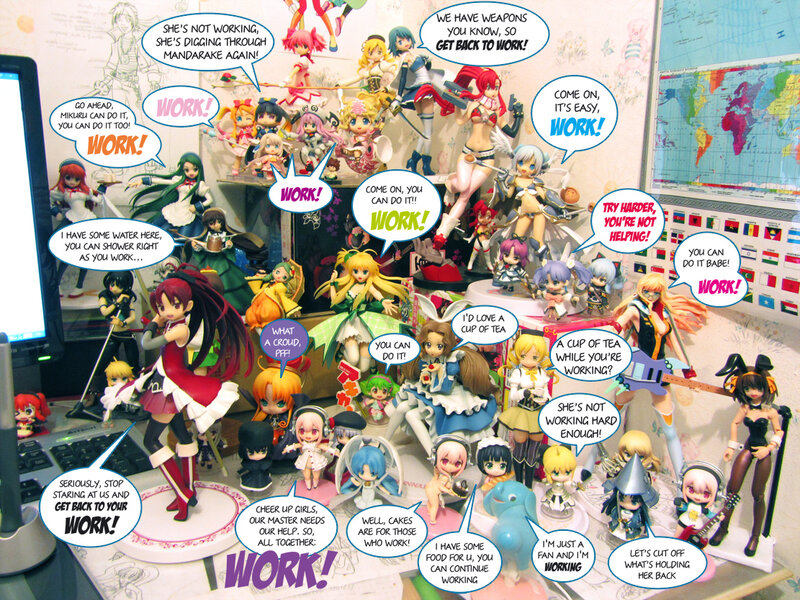 fotki.yandex.ru...
Haha that's great! ^^ They really try to motivate you, right? Same here ... Melissa always gets angry when I secretely open the Mandarake site ... XD I need to check from time to time, you know?!
7 anos atrás

acolyte
mikki-malu • 7 anos atrás • #1567309I work at home so I can put on my desk anything I like as long as it leaves me some working space :) So my figures took half a table. Can't complain though, they're very helpful :))))
Do they make you more productive? o.o
7 anos atrás⊛

mikki-malu
I work at home so I can put on my desk anything I like as long as it leaves me some working space :) So my figures took half a table. Can't complain though, they're very helpful :))))

secretly-otaku
pandidora • 7 anos atrás • #1567034...They find these small figures cute and girly. It's really good to look at them sometimes!The moment I read "figures cute and GIRLY", I just turned my eyes to Nendo Stocking and imagined her saying something like: "Yes, you're a 5'11 tall guy in his mid twenties with a GIRLY figure on his desk... and I won't go back to the drawer until 5 O'clock". I guess she's right xD.

Keripo • 7 anos atrás • #1567219I can't imagine myself watching anime at work (feels too unproductive and would have to use earphones)...Well, it is not like I am unproductive ALL the time, I mean... only during my lunch time... and, you know, when I really don't have anything else to do, which is not THAT often... Man, I just felt like I deserve to be sanctioned now xD
7 anos atrás

Keripo 「ケリポ」
Tiamat26 • 7 anos atrás • #1566541Keripo I want to work were you do.. There is no way I could have that poster with the way Yoko is posed where I work. I would be told to take it down right away... to racy for my office. Very cool set up Love it.
Tia
You can apply at careers.microso... xD
I originally had wall scrolls all around my office (see sphotos-f.ak.fb...) but decided to take them down except the Gurren Lagann one as I thought they'd be too distracting for people passing by my office (I'm personally used to being surrounded by anime stuff so I actually don't even notice; see my living room: PICTURE #715363). As for Yoko, to be honest, I didn't even notice it much when I bought the wall scroll a long while back (was more looking at the badass Kamina) and guess it never really bothered me. Haven't had any complaints yet so far - just one manager from another team who dropped by and asked, "Do you watch Bleach?", to which I responded no, and he walked away xD

secretly-otaku • 7 anos atrás • #1566673Awesome office! I love big windows on a 2nd level and facing the street, but not facing the hallway (wouldn't be able to watch anime peacefully where I work at xD)
I can't imagine myself watching anime at work (feels too unproductive and would have to use earphones) and I've got coworkers all around in their units. Surprisingly though, my office isn't the most decorated; walking around the building, I've seen an office with the entire desk covered with Transformers. The office diagonally across from me also has posters and flags covering both walls (third wall is a whiteboard, and fourth is the glass window), though anime stuff is probably a lot less common xD

Made me want to take some shots of my office too! PICTURE #732907
I work in a library. I only dare to put small figures like these on display. They would call me crazy if they saw something bigger.
They find these small figures cute and girly. It's really good to look at them sometimes!
7 anos atrás⊛

kirarakim
I used to take a couple of my figures to my old job. In fact for the longest time I had a Kenshin figure on the top of my work computer. He fell off and his sword broke, so I stopped taking figures to work.

The newer ones I have are more expensive so I definitely won't be taking them to work anytime soon.
7 anos atrás
Ver mais comentários